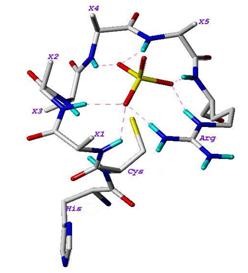 Cancer is the second leading cause of death worldwide, following heart diseases. World Health Organization has estimated 12 million deaths worldwide due to cancer in 2030 [1]. According to the American Cancer Society, about 1.5 million new cancer cases and more than 500,000 deaths are expected to occur due to cancer in USA alone in 2009 [2]. Although progress has been steadily made in cancer research to reduce mortality and improve survival, cancer still accounts for nearly 1 in every 4 deaths in the USA [2]. There are many different types of cancer, but all share a common feature – rapid and uncontrolled cell proliferation. Emergence of new tumors is associated with mutations or abnormalities in expression of various cell cycle regulators like cyclins and cyclin-dependent kinases (Cdk) [3]. Therefore, targeting Cdk/cyclin complexes represent a promising therapeutic approach in oncology.

Cell Division Cycle 25 (Cdc25) Phosphatases are Dual-Specificity Phosphatases (DSP) that dephosphorylate and activate the Cdk/cyclin complexes, thereby playing a fundamental role in transitions between cell cycle phases. Also in the event of DNA damage, the Checkpoint Response targets the Cdc25 phosphatases to ensure genomic stability [4,5]. In mammalian cells, three isoforms of Cdc25 phosphatases have been identified : Cdc25A, Cdc25B and Cdc25C. Overexpression of Cdc25A and Cdc25B has been reported in many diverse cancers, thus making them interesting targets for the development of novel anticancer agents [5].

The structure of Cdc25 proteins can be divided into two main regions: the N-terminal region, which is highly divergent and contains sites for its phosphorylation and ubiquitination which regulate the phosphatase activity; and the C-terminal region, which is highly homologous and contains the catalytic site [6]. The crystal structures of the catalytic domains of Cdc25A (PDB ID: 1c25) and Cdc25B (PDB ID: 1qb0) have been solved by X-ray crystallography [7,8]. As shown in Figure 1, the active site loop of Cdc25B has the HCX5R motif, which is highly conserved among the Protein Tyrosine Phosphatase family. H is a highly conserved histidine, C is the catalytic cysteine, and the five Xresidues contribute their backbone amides along with the side chain of arginine (R) to form H-bonds (shown as dashed lines in the figure) with the bound sulfate [8].
A large cavity adjacent to the active site of Cdc25B contains a large number of well-ordered water molecules, called the “swimming-pool” by Rudolph, has shown to accommodate most of the Cdc25B inhibitors [9]. The hotspot residues, which are about 20-30 Å from the active site, are the key elements for substrate recognition [10].

A large number of potent small-molecule Cdc25 Inhibitors have been identified that bind to the active site and belong to various chemical classes including natural products, lipophilic acids, quinonoids, electrophilies, sulfonylated aminothiazoles and phosphate bioisosteres [12]. Quinones as inhibitors of Cdc25B will be emphasized during the course of the seminar. The reported quinones that inhibit Cdc25B with IC50 values in the micromolar range (Figure 2) either have a naphthoquinone, quinolinedione, indolyldihydroxyquinone or benzothiazole/benzoxazole-dione core structure [13,14].

Figure 2 – Quinones as Inhibitors of Cdc25B

Although some progress has been made in developing potent and selective inhibitors for Cdc25 family of proteins, there is scope for development of novel therapeutic strategies to target them. A new class of peptide-derived inhibitors, based on sequence homology with the protein substrate, can be developed. It is challenging to use these compounds as drugs due to their lack of suitable ADME properties [12]. Also, the existence of a potential binding pocket for small molecules adjacent to hotspots on Cdc25B has been proposed [6]. Binding of suitable ligands into this pocket could engage the hotspot residues and interfere in enzyme/substrate association.

Cdc25 phosphatases represent a good target for development of novel antitumor drugs. Crystal structures of Cdc25A and Cdc25B provide a rational basis for the design of potent and selective inhibitors. Further improvement of these inhibitory compounds is likely to lead to their introduction in human clinical trials.