Home
Notes
Pharmacology
Formulation and Routes of Administration of Drugs 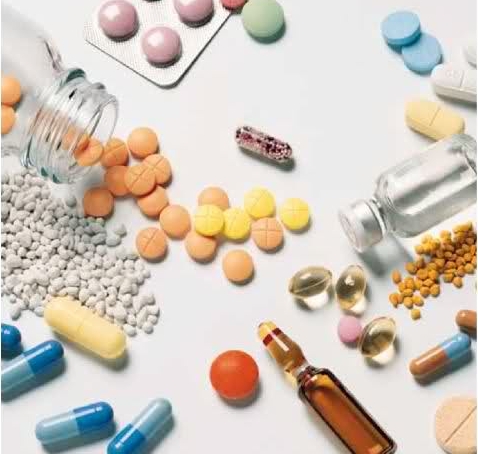 A picture showing different drug formulations. Taken from the cover of reference 3.

Solid formulations are generally given orally and are used most commonly by patients.

Solid drugs are administered in the form of tablets. The tablet is disc shaped and is made by compressing a granulated powder in a die of the suitable machinery. It is made up of inert filler material since the drug maybe required only in small quantities. To help the tablet disintegrate in the GI tract it is coated with a substance like starch which swells up when in contact with fluid , such substances are called excipients. Binding agent to hold the tablet together and finally lubricating material to prevent the tablet from sticking during manufacture. They can be sugar coated or film coated. Some are given as chewable tablets and flavourings can be added to this. These are called Dragees.

These tablets are coated with a material that does not disintergrate in the acidic medium of the stomach but disintegrates in the alkali medium of the intestine. These have EC written on their cover and it is essential that these drugs are not crushed and swallowed. Now some of these preparation are made in which small portions of the drugs are enteric coated into tiny balls and are enclosed in a capsule. This can be opened and sprinkled on a suitable medium and then swallowed.

Capsules come in two forms: Hard and soft. Hard contains the drug in solid form and the soft contains the drug either in liquid or semi – solid form. The soft capsules are useful for the drugs that are hard to dissolve in water these are then dissolved in non – toxic solution such as propylene or glycol and can be easily absorbed in the GI tract.

Useful of drugs that have a short half life and hence such drugs are formulated to be released slowly into the digestive tract. Also called slow release or retard release. This is also done to improve the compliance to the drug.

Since the amount of drug that would be disintegrated would depend on the composition of the GI tract of the individual and hence there would not be much uniformity there is a new technique called the controlled release tablets. In this case the drug is covered with a semi permeable membrane and hole is punctured through this membrane with the help of a laser. Once the tablet enters the GI tract the water seeps inside thru the hole and the tablet swells and due to the difference in the osmotic pressure the drug is released. This method is preferred since the amount of drug released is same for most of the people since it is not pH dependant. These drugs would have CR or SR written on the cover.

Such preparations are made when it is difficult to swallow the medicines. Flavourings can be added. But it should not be that flavour is given a lot of importance since then drug abuse is possible. Sugar is added in some cases but mostly sorbitol (sugar alcohols) is now used and it is good since it acts as a osmotic laxative and can prevent drug abuse. When the drug is insufficiently soluble in water then it is dissolved in alcohol such a drug is called exilirs. Incases where the drug is used as a solid and alcohol is not used for dissolving then such solutions are called suspension and when the liquid which is not soluble is used then it is called emulsion. Such drugs should be well shaken before use.

The application of a drug to an area of the body for direct treatment is called topical application and is not restricted to the skin and hair but can be used in the mouth and entire GI tract during operations.

Utilizes the mucosa of the mouth as an absorptive medium. This is useful when the drug is active in very low concentration in the blood. When the drug is administered like this it directly enters the blood stream and has a systemic action where required. It is also useful to bypass the hepatic first pass metabolism. This method avoids the mixing of the drug with food and other gastric juices which may impede absorption. Sublingual is under the tongue and is allowed to dissovle e.g. glycerl trinitrate Buccal is between the cheek and gum and is allowed to dissovle. E.g. oxytocin Buccal tablets are too large to be administered sublingually.

It is mainly a topical application where the drug is absorbed from the epithelium of the nasal tract. Mainly used to relieve nasal congestion but can also be used for drugs that are destroyed by the enzymatic action when taken in by the mouth.

The skin can also be used for direct application and absorption of the drug but the drug is very slowly absorbed and in very less quantity and this is due to the presence of keratin in the cells of the skin. Therefore drugs that are needed in very small quantities and for long period of time are administered in this way. These include transdermal patches and gels and spray.

Enemas: are also preparations for rectal administration but are liquid. These can be used for topical or systemic treatment and also for bowel movement. Topical and systemic applications the solution is hypotonic such that fluid will be taken up by the body along with the active ingredient. In case of bowel motion the solution is hypertonic to cause an outward flow of water from the body into the distal portion of the digestive system.

Any method of drug administration that avoids the GI tract is called parental administration. Drugs can be inserted anywhere with the help of injections.

Intradermal administration: drug is inserted into the dermis. Rarely used since absorption is slow and only small quantities can be given. E.g. Local Anesthesia

Subcutaneous injection: Slow drug absorption but mainly for drugs that cannot be given through the mouth for e.g. Insulin. This method is used when other modes are harmful. The effect of the injection can be decreased by adding adrenaline as this would cause vasoconstriction and slow absorption of the drug. If another drug is added like hyaluronidase it will enable the drug to be absorbed more quickly since it will destroy the tissue cement the hyaluronic acid.

Intramuscular Injections: The skeletal system is highly vascular and hence drugs with low molecular weight can easily pass through by direct diffusion into the blood stream thru the capillary walls. Mainly lipid soluble drugs are easily absorbed. Lipophobic drugs are absorbed into the lymphatic system. When mixed with oil the drug disintegrates slowly and may take several weeks for action called the depot injections. Diadvantage: is the damage to the nerves and hence care has to be taken while giving such injections.

Intravenous Injections: this administration avoids the process of absorption and hence very fast action can be achieved.

administer to the lower respiratory passage of the body.