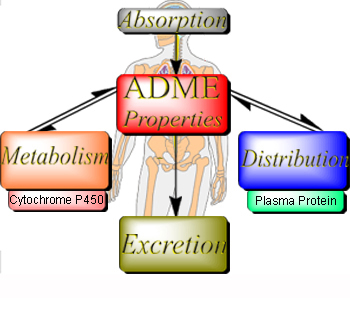 The four processes involved when a drug is taken are absorption, distribution, metabolism and elimination or excretion (ADME).

Pharmacokinetics is the way the body acts on the drug once it is administered. It is the measure of the rate (kinetics) of absorption, distribution, metabolism and excretion (ADME). All the four processes involve drug movement across the membranes. To be able to cross the membranes it is necessary that the drugs should be able dissolve directly into the lipid bilayer of the membrane; hence lipid soluble drugs cross directly whereas drugs that are polar do not.

For a drug even though lipophilic to be absorbed in the intestine some portion of it needs to be dissolved in the intestinal juices which are aqueous. There are some substances that are partly soluble in water and it is these that will be absorbed and then an equivalent amount will be absorbed from the undissolved portion. Thus complete absorption will take place. There are bile salts present in the intestine which will aid in salvation of the drug and their resultant absorption. Drugs that are amphipathic have no problem in getting absorbed. There are some drugs that are completely insoluble in water such drugs float as globules in the intestine but the bile salts will emulsify these into small enough particles such that absorption can take place. E.g. vitamins. Some of the drugs are similar to compounds found in the body for e.g. thyroxine and such drugs can be absorbed into the system by active transport.

When drugs are injected into the muscle, subcutaneous layer absorption still has to take place but it is less dependent on the chemical nature of the drugs since the drugs are absorbed into the circulatory system through the small pores in the capillary walls.

The blood stream has the ability to transport relatively insoluble substances. These substances are transferred by binding to the proteins which have a very amphipathic structure. The hydrophilic group renders the protein soluble in water and the lipophilic compounds are attracted to the lipophilic group and are loosely bound to the protein molecule hence protein bound. Most of the drugs travel in the plasma are partly in solution and partly bound to the plasma protein. The bound drug is inactive and the unbound drug is active. The ratio of bound to the unbound drug varies. Binding is reversible. Generally acidic drugs bind to albumin and basic drugs to α1 – acid glycoprotein. Diseased state can cause a problem on the effectiveness of the drug. As globin levels increase with age this factor should be taken into account when treating an elderly person with a basic drug.

The protein bound drug is in equilibrium with the free drug. That means that once the free drug enters the target tissue then the protein bound drug will be released to maintain equilibrium. If two drugs bind at the same site of the protein and are administered together then there can be problems. e.g. Warfarin and asprin.. asprin displaces warfarin from its bound protein as a result of which there are elevated levels of warfarin in the unbound state and this can lead to warfarin toxicity.

After absorption most drugs are distributed in the blood to the body tissue where they have their effect. The degree to which the drug is likely to accumulate in the tissue is dependent on the lipophilicity and local blood flow to the tissue. Highly perfused organs receive most of the drugs.

The role of the liver in drug distribution

The hepatic portal system is designed to take digested foodstuff into the liver where it can be processed, in some cases it is stored before being distributed and it is possible that this may happen to the drug and the drug would be metabolized before reaching the rest of the body. Such drugs that metabolized by the liver are said to have a high hepatic first pass. Hence drugs with a very high hepatic first pass cannot be given orally.

The capillaries in the CNS are different they have pores which are sealed by the connective tissue and hence only small molecules can cross the blood brain barrier and the substances that can cross over have to be very lipophilic in nature. The blood-brain barrier (BBB) is the protective mechanism of the CNS and is not present everywhere in the brain. This is sometimes useful as it avoids some drugs from crossing the CNS and causing deleterious effects. E.g. neuromuscular blocking agents. Sometimes the blood brain barrier allows the transport of drugs resulting in unwanted effect for e.g. antihistamines cross the bbb and result in drowsiness, now there are antihistamines that are made that are not so lipophilic in nature.

It is the process of transformation of a drug within the body to make it more hydrophilic so that it can be excreted out from the body by the kidneys. This needs to be done since drugs and chemicals are foreign substances in our body. If the drug continues to be in the lipohilic state and is going to be filtered by the glomerulus then it will be reabsorbed and remain in the body for prolonged periods. Hence metabolism deals with making the drug more hydrophilic such that it can be excreted out from the body. In some cases the metabolites can be more active than the drug itself e.g. anxiolytic benzodiazepines.

Some enzymes are highly specific and will breakdown only compounds that they recognize for e.g. glucose dehydrogenase. But there are some enzymes such as pepsin which are not specific and will breakdown most soluble proteins into smaller polypeptides or amino acids. This enzyme and many other proteolytic enzymes attack the peptide bond that joins the amino acids to make proteins, and in this way break the protein down.

Two types of enzymes are involved in metabolism:

These enzymes modify the drug chemically by processes such as oxidation, reduction and hydrolysis or by the removal and addition of an active group.

These include the conjugation of a drug or a phase I metabolite with a polar group to render it possible for excretion. e.g. sulphates and glucuronide

The deconjugation of the drug by bacterial enzymes is called the enterohepatic cycle. Sometimes this deconjugation can lead to increased levels of drugs in the body. But some times due to treatment with antibiotics there may be less or no deconjugation as a result of which there will be less drug in the body.

Principal sites of metabolism are Liver and Kidney and once the drug is rendered hydrophilic they can be easily excreted out by the bile and urine without significant reabsorption.

There are some drugs that can lead to an increase in the production of the enzyme and as a result speed up the metabolism of the drug and hence a higher dose of the drug is required to achieve the therapeutic effect.

Some drugs result in the inhibition of certain enzymes and as a result there is an accumulation of the drug in the body and can lead to drug toxicity. This is also a form of drug – drug interaction.

Excretion is the removal of the substance from the body. Some drugs are either excreted out unchanged or some are excreted out as metabolites in urine or bile. Drugs may also leave the body by natural routes such as tears, sweat, breath and saliva. Patients with kidney or liver problem can have elevated levels of drug in the system and it may be necessary to monitor the dose of the drug appropriately since a high dose in the blood can lead to drug toxicity.

Half life of a drug is the time for the drug to decrease to half of its concentration.

Minimum effective concentration: below which there will be no therapeutic effect.

Maximum safe concentration: above which there will be a toxic effect The larger the therapeutic index the more safer the drug.

Bioavailability: It describes the amount of drug that is available to the body to produce a therapeutic effect.

Onset of action : it is the time taken for the drug to reach the minimum effective concentration after a drug has been administered.

Peak Action: occurs when the drug reaches its highest blood or plasma concentration

Duration of action: is the length of time the drug has a pharmacological action.