Home
Animations
Antibiotics
Mechanism of Action of Quinolones and Fluoroquinolones

Quinolones and fluoroquinolones consists of drugs which act as chemotherapeutic agents against bacteria consisting of drugs which generally contain the term “oxacin” in the end. Fluoroquinolones and quinolones cause severe side effects in rare cases and are therefore not used for regular treatment of bacterial infections. They are generally used for more resistant strains of bacteria and are especially useful in genitourinary infections. Structurally these drugs contain a quinoline ring system and hence given the name quinolones. After the first generation of drugs were found to be active, it was noted that a fluorine atom at the 6-position of the quinoline ring imparted greater potency, and hence the second generation of drugs was called the fluoroquinolones.

There are two animations which describe the mechanism of action of quinolones and fluoroquinolones. The first one is the older animation while the second one is the newer animation.

NOTE – In the above animation the enzyme is DNA-gyrase or DNA topoisomerase II, while the antibiotics are the quinolones or fluoroquinolones.

Quinolones and fluoroquinolones inhibit bacterial replication by blocking their DNA replication pathway. DNA is the core genetic material of the cells, and is responsible for proper functioning of the cell. During protein synthesis and DNA replication, the double-stranded DNA needs to unwind into a single stranded structure, which allows for complementary base pairing to occur and synthesis of mRNA to procede. This unwinding of DNA in the bacteria is done by enzymes in the bacteria called DNA gyrase or DNA topoisomerase. DNA gyrase is a topoisomerase II type enzyme that unwinds the DNA by introducing negative supercoils and can also help relax positive supercoils. Quinolones and fluoroquinolones inhibit this enzyme by binding to the A-subunit of the enzyme due to which the bacteria is unable to replicate or even synthesize proteins.

The above animations has been supplied by Dr. Gary E. Kaiser from the Community College of Baltimore County– and it illustrates the mechanism of action of quinolones and fluoroquinolones by inhibition of DNA gyrase (topoisomerase II). The transcript from his website states:

“The fluoroquinolones (norfloxacin, lomefloxacin, fleroxacin, ciprofloxacin, enoxacin, trovafloxacin, gatifloxacin, etc.) work by inhibiting one or more of a group of enzymes called topoisomerase, enzymes needed for supercoiling, replication and separation of circular bacterial DNA. For example, DNA gyrase is a topoisomerase that catalyzes the negative supercoiling of the circular DNA found in bacteria. Topoisomerase IV, on the other hand, is involved in the relaxation of the supercoiled circular DNA, enabling the separation of the interlinked daughter chromosomes at the end of bacterial DNA replication. In gram-positive bacteria, the main target for fluoroquinolones is DNA gyrase (topoisomerase II), an enzyme responsible for supercoiling of bacterial DNA during DNA replication; in gram-negative bacteria, the primary target is topoisomerase IV, an enzyme responsible for relaxation of supercoiled circular DNA and separation of the inter-linked daughter chromosomes.
When an antibiotic binds to a bacterial enzyme, it may alter the activate site of the enzyme and prevent it from reacting with its substrate” 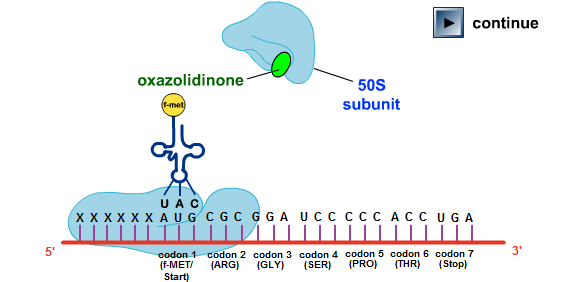